A while back I talked about PES vs. FIFA, and I was in high praise of what I saw from PES 2020. At the time I hadn’t played it, but the videos I saw looked really good. Not long later the demo released, and I had the same notion initially, but as the days went by I realised some things just aren’t there yet.

Just recently the highly anticipated FIFA 20 demo released, and let me not lie it’s grown on me. I was struggling at first because I haven’t played FIFA in a LONG TIME and I was very much used to the PES 2020 demo I’ve been playing. But you can’t play both games the same way, unfortunately.

After playing the two, I can finally justify which one is better, and that’s exactly what I’m going to do right now.

One thing I will always give PES over FIFA is the fact it always looks visually stunning. Not that FIFA looks horrible; but the stadium, outside it, the pitch, and the players just look more visually crisp than FIFA. It just looks like more time and effort were put into its creation. Every year there’s always a comparison with the faces, and I would say that it’s been 50/50 in recent years. This is because FIFA more time than not actually resemble the player better PES does, but the PES faces always seem to be more detailed.

If you watch the video above (or even look at thumbnail) you might be able to see what I’m talking about. FIFA 20 definitely has the better face between the two Van Dijk’s (for example). But FIFA’s faces seem more plastered on, whilst PES’s is more detailed to look like the face is actually human (I guess that’s why they use artists). One thing that irks me about PES compared to FIFA is THE MOVEMENT IN THE FINAL THIRD. In midfield, the players are always trying to make to space for a pass, but as soon as you get to your frontline, it’s like no one wants to move anymore. A lot of attacks breakdown because you have to force things through, and this is very frustrating. Its counterpart does a great job with the AI Intelligence, and players are constantly trying to find space, or running into channels to take a shot on goal, which is something very clear from the get-go. 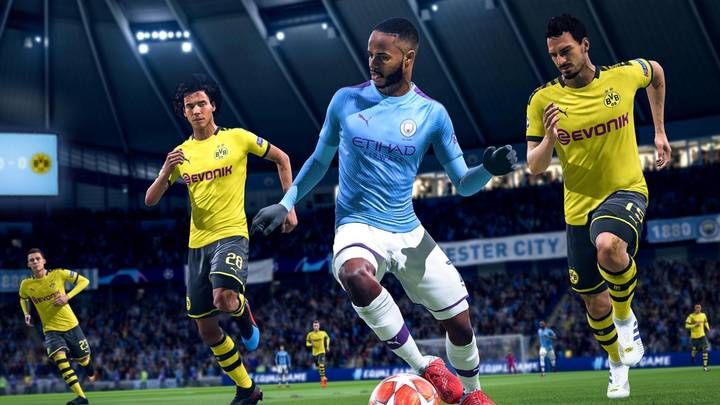 FIFA’s new animations have definitely improved the game, and it’s funny I’m saying that because every time they’ve announced these things I’ve always been like: “That’s not a new feature,” and to be honest, I never saw the difference anyway. FIFA 20 implements these changes very well. I mean the shooting animations are a lot better, the dribbling looks more realistic, the mechanics of the ball are more visual than ever giving that sweet strike a whole other view, so congratulations to FIFA on that one.

There’s nothing really wowing about the animations of PES, I mean it’s pretty standard stuff for how a football game should be. But if there’s one thing I can say, it’s THANK YOU FOR FINALLY FIXING THAT AWFUL ROBOTIC MOVEMENT!!!!! Every single PES (post PS2) had these players moving like damn robots, and it ruined most of the game! Now things are a lot smoother and realistic the game plays a lot better, so congratulations on Konami for that. It’s the same as last year in a sense (I mean it’s a sports game), but it has improved from the calamity that was FIFA 19. Firstly, the game has become a lot more tactical. No more run with a fast player, one-two, finesse and score. Thought actually has to be put in your play, which is refreshing for FIFA because every year there’s always some BS going on. It’s also not as easy to score as before. I remember how every finesse shot used to go in. A double-edged sword for sure, but now I feel the game is a lot more balanced. The game has also slowed down slightly, but it’s still fast so I have no issue with it. And the biggest surprise of all, I don’t have anything I dislike about the game…YET ( you can never trust EA).

In terms of a FOOTBALL SIMULATION game, it’s unrivaled. If you want to play something as close to its real-life counterpart, this is the game for you. The game itself plays fantastically well and has a really solid foundation to work off that FIFA could not rival. But with all that being said, there are still a few things they need to work on, which I will list below:

If you’re looking for the best football simulator out there, then PES 2020 is your game. Although it’s only one thing, it’s a massive element in terms of gameplay, which I think is better than FIFA 2020. FIFA 2020 is more “arcadey/ping pong,” hence why everything is much faster in comparison. But if you strip that aspect away, FIFA 20 is better than PES 2020 in every single way. I immediately wrote FIFA 20 off because of how bad FIFA 19 was, but FIFA 20 is it’s saving grace. I feel they have got lazy over the years because they’ve had no real competition, and maybe they stepped up their game because they’ve seen PES has made MASSIVE strides this year.

I must say though if PES can build on what they’ve done for this year, I feel they could easily surpass the FIFA franchise soon.

What do you think of both demos? Which game do you feel is better? Do you agree with my assessment on both games? Let me know in the comments below.