I’ve been stalling to write about this because:

But here we go…

In light of George Floyds’ death and all the protests. It really made me think about certain things. These thoughts aren’t things I don’t already know, but THIS movement has enlightened me on these issues.

Firstly, racism is the stupidest man-made creation. It almost asks me to pose the question: “If you hated us so much, why didn’t you just leave us alone in the first place?” But of course, we know the reasoning behind that.

Recently I was at the barbershop having a “barbershop conversation” (some of you will know what I’m talking about), and one guy was talking about how Black people are the only people that give/share and let people in so freely/easily. Which was how the plan of slavery was initiated, wasn’t it? From my understanding, it was a sense of jealously (from how we were living) that made the white people invade and enslave us. But I’m sure we showed our hospitality and were very welcoming when they visited because that’s how we naturally are.

He then went on to pose the question “Do you think you can come into China or any other place and just take like we allow other people to do?”

Impossible. But then it’s deeper than that.

I’ve seen countless videos that have circulated of how we’ve been treated. And the constant ignorance (if you can call it that) of white people with these injustices is mind-boggling.

Another issue is what we have and haven’t been taught in schools, etc.

They told us Malcolm X was a bad guy, a violent guy. But if you take it upon yourself to educate yourself on his teachings and words, you will find that is far from the case.

Another great video is Louis Farrakhan on Donahue. The full video is quite long, but it’s astonishing how the white people in the audience dare to disagree with what he says at any point. And THAT is where the problem lies because what is it making some white people simply refuse to understand the truth of the matter. 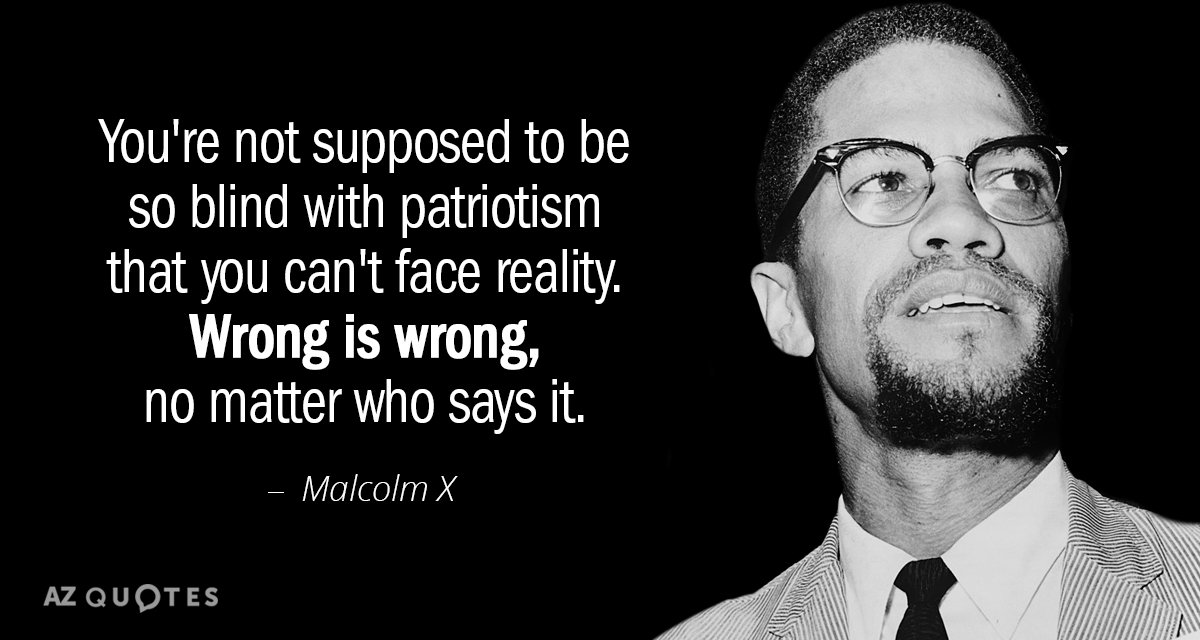 When this Black Lives Matter movement was at its peak, my main question was: “What can I do?”

But seriously, what can I do?

I wrote a post during #BlackOutTuesday on my Instagram, and one thing I said was “I Don’t Believe This Will Be The End Of This, And I Do Feel We Have To Come Up With A Better Way To Get Our Voices Listened To” (I write like that on Instagram, sorry). But if I’m going to be honest with you, I don’t think this will ever end. I when I say ever, I mean until the last human has perished (if that ever happens).

I’m Not Really Much Of A Talker Unless You’re Talking To Me/Asking Me Stuff. These Recent Events (George Floyd, Breonna Taylor, Ahmaud Arbery, Etc.) Haven’t Opened My Eyes To Anything I Did Not Know Already, But It Has Definitely Made Me Think & View Certain Things In A Different Light (Which I Will Speak About Later). ⠀⠀⠀⠀⠀⠀⠀⠀⠀⠀⠀⠀ I Don’t Think I’ve Ever Witnessed Such An Upraor, And A Coming Together Between People Of Different Countries, Races, And Major Brands/Companies On The Injustice Our People Have Faced For DECADES! And Although I Feel Some Of These Companies Are Doing It “For Show,” The Fact There Is This Much Pressure Rn For Their Hands To Be Forced Is Something That Can Only Be Commended. I Don’t Believe This Will Be The End Of This, And I Do Feel We Have To Come Up With A Better Way To Get Our Voices Listened To Because There Ain’t No Way They Haven’t Heard Us FOR ALL THIS TIME Yet Here We Are In 2020 Doing The Same Damn Thing. Even With That Being Said, It’s Important To Keep Up The Noise In Whatever Way You Possibly Can BECAUSE ALL LIVES DON’T MATTER UNTIL BLACK LIVES MATTER. And For The Love Of God, Allah, Buddha, Ganesh, Fuck, Even Darwin I Couldn’t Care Less. Don’t Be Scrolling Past All This Shit You’re Seeing On Your TL Or Stories Turning A Blind Eye With No Action. Because You Become Part Of The Problem… ⠀⠀⠀⠀⠀⠀⠀⠀⠀⠀⠀⠀ #BlackOutTuesday #BlackOutDay #BlackOutDay2020 #JusticeForGeorgeFloyd #BlackExcellence #Melanin #BlackGirlMagic #SayNoToRacism #NoToRacism #BlackMen #BlackQueen #BlackLove #BlackWomen #Love #BlackGirlsRock #BHFYP #BlackPeople #BlackPower #BlackKing #BlackKings #Equality #Repost #MelaninPoppin #BlackEmpowerment #BlackEmpowermentMovement #MelaninGirls #SayTheirNames #SayTheirName

We can look at Donald Trump and his followers, most NFL owners, white supremacy groups, closet racists, racist racists, etc. They are all still very much active. You don’t think they’re going to pass that shit down? I mean education is important I know, but you’re telling me with 400+ years of it people still haven’t learnt?

Things have to change in this society 100% But I feel the real work starts at home. And I don’t mean educating our Black children on how to deal with the police, but helping our community grow and flourish. Like the guy at the barbershop was saying, we are the only race that easily lets people in to take. Jewish people stick together, Asian people stick together, the whites definitely stick together to maintain their power. But us, we’re broken. Broken as a people, and broken individually, but it’s not out fault.

What is our fault is allowing it to continue. They tell us to “Forget about slavery,” but the reason for CONTINUOUSLY bringing up these tragic historical events is so they are not repeated. Same with the Holocaust, the same with 911, and the same with Grenfell. A constant reminder of a tragedy serves a purpose when moving forward. But for us, the most disrespected and underappreciated race on the planet, history has not served as a lesson. In fact! History keeps repeating itself. And that is why I say the help starts at home. Because we can’t allow/trust the white people in power to govern our future because they simply do not care. I mean, after 400+ years you would think things would have changed right? RIGHT??!!?

They pretend to care with cheap gimmicks such as this: https://www.espn.com/nfl/story/_/id/29401000/nfl-plans-play-black-national-anthem-week-1-games. further proof, as this doesn’t solve the problem at hand.

I know this is mostly going to fall on deaf ears, but let’s stop with all this gang nonsense. You’re fucking fighting over a postcode or area that doesn’t even belong to you, make it make sense. Let’s start uplifting each other, investing in each other, building each other and our communities, and creating our own opportunities. Even me who never gave a fuck about “having a type” is starting to think to only go for Black women (although I’m still on the fence about this because not all white people are bad).

I want to end by stating this isn’t about segregation or “Fuck white people” before someone starts chatting shit. It’s about building a strong foundation for our people to truly flourish. Because it’s clear that the one in place is, and will never be built for us.

If you have any thoughts on this matter, please let me know in the comments as I will be making a part two on a different subject matter very soon.

Many petitions are still a couple of signatures from reaching their goal. Just click the link below, and select the icons of faces you see to sign. This is not over